A downloadable game for Windows

Wayward Ventures is best played with friends. Playing the game solo is near impossible as you will depend on your crewmates to sail your ship. As there is no in-game chat, it is best to use a VOIP program like Discord or Skype to communicate. If you’re looking for a server to either find team mates or talk with your existing crew; join the Wayward Ventures discord server!

To host a game, you’ll need to either use a VPN tool like Hamachi, or forward ports 7777-7778 on your router. When you’re ready; launch the game and select Host Server from the menu

In order to join a game, you will need the IP of the game’s server host. This is either their Hamachi IP, or their public IP address (easily found by using whatismyip.com)

Once you have your IP, enter it in to the box under the Join Game section of the menu and press the join button.

F – Primary Interaction Button; for interacting with the world such as opening doors, picking up objects, etc

I – Press to toggle Inventory

Players currently start Wayward Ventures with a 12 gun Galleon. It can be found at dock in the main central port players spawn at. It can be identified by its blue and yellow colour scheme.

The galleon has 5 sails; each sail contributes a set amount of speed to the ship’s acceleration.

The ship can be boarded from water level by interacting with the side ladders in-line with the ship’s wheel.

The ship’s armament breaks down practically in to the following categories: Bowchasers are used to fire at targets dead ahead of the ship. Sailing your galleon requires learning how to make as well as take in sails. The galleon has 5 sails.

To unfurl (or make) sail, the yardarms need to be interacted with. This is best done with a player on either end, mashing their F keys until the bar is filled. However, a player can unfurl the sail alone by filling their interact bar on one end of the yard, and quickly crossing over to the other side to do the same. If this is done fast enough, a single player can unfurl the sail themselves.

Once the sail is unfurled, it will need tying down, this is done by interacting with the belay pins found on deck. These interactions are carried out in the same way to the sails.

To furl (reduce) a sail, this process is repeated in reverse.

(Belay pins are seen in the screenshot below) Fighting hostile ships in Wayward Ventures first involves preparing the guns aboard ship. To do this; each gun must be loaded with a powder cartridge and shot.

Both cartridges and shot are found in boxes aboard the ship. Interacting with them will pick up either a single cartridge or shot;

Once this is done, interacting with a gun will load it. A gun can be loaded with just a cartridge, but will only fire powder (no shot).

To fire a gun, equip a slowmatch and left click the gun with it.

Important: Once a gun is fired, smouldering debris is
left behind from the powder and shot. This is indicated by a smoke trail
emanating from the gun. If a fresh cartridge is loaded without cleaning
the gun there is a chance it will detonate (this is bad!). To clean the
gun, equip a sponge and mash left click on the gun until the smoke
trail is no longer present.

Small arms are the means with which you will prosecute hostile NPCs and players. They consist of pistols, swords, and muskets.

Right clicking will block with the sword. Blocking lasts a couple seconds during which you are unable to take further action; but any sword hits made against you will be parried. To sheath the sword simply equip it again.

Pistols and muskets are loaded by holding the R button. Loading takes a long time and should generally not be attempted in battle. Once loaded, press the R button to cock or decock the gun’s hammer. All firearms must be cocked before they are fired.

Lastly, all firearms are drawn facing up (for safety!) right click to toggle between pointing forwards and pointing upwards.

These are a VERY IMPORTANT item! All players should carry at least one lifeline with them at all times. Should you fall overboard whilst sailing, equip your lifeline and activate it with left click. Provided you are still close, you will be returned to the ship This is extremely useful for navigation. There is always one found in the Captain’s quarters Equally useful for navigation but also essential for pursuing quests from NPCs that give bearings. Found in the Captain’s quarters

Tea regenerates your life, equip and use with primary click to drink. There are two main factions in the game with a third planned; The yellow faction (neutral) and the green faction (hostile). Not all ships adhere to these colour schemes though so be wary of their behaviour.

Speak to this NPC found in the central town to ascertain the direction of the nearest port. Sign their ledger to begin purchasing cargo. Each signature will spawn a cargo box next to the NPC. If these are brought to a shipping warehouse at another port they can be sold for profit. Speak to this NPC to repair your ship

There is a bug where the server hosts screen can lock frequently. This can be quickly remedied by entering and exiting the inventory. Repeatedly firing the ship’s guns without cleaning them is dangerous; if a gun malfunctions it will explode and be irreparably lost.

It is very difficult to see to all tasks aboard ship yourself. It is also a bad idea to just assume someone else will see to something. Consider electing a leader or assigning roles to crewmembers. Gunners, sail handlers, lookouts, helmsmen, etc.

It is recommended that you carry a sword or pistol on your person at all times. The ship starts the game with a stocked armoury located towards the front of the ship. (Forecastle)

Always have someone at the helm of your ship during a storm. They will need to fight the wind as it pushes the ship around. If this isn’t done the ship will almost assuredly capsize.

Wind is not simulated in Wayward Ventures. Tacking to adjust for wind direction should not be taken in to consideration when sailing.

As there is no working Capstan/Anchor system yet, the fastest way to bring the ship to an immediate halt is to untie all the sails.

booo i cant do any thing it sucks! booo!

heh, were you playing solo? It's quite difficult to get anywhere by yourself - if not though, what problems were you running in to? 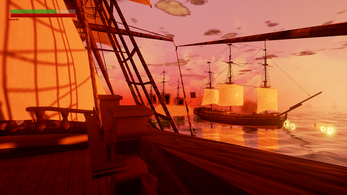 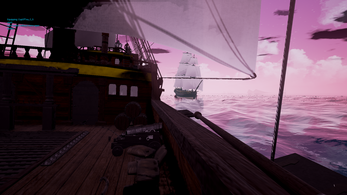 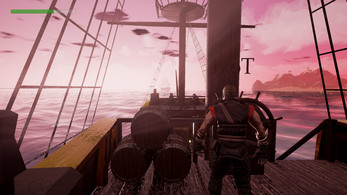 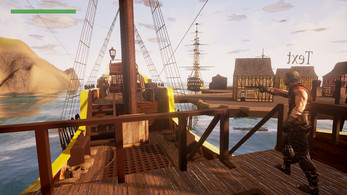 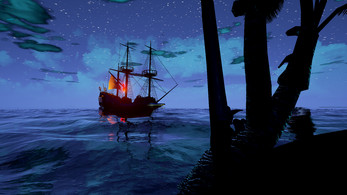 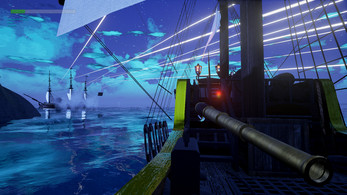